Another day in the office... 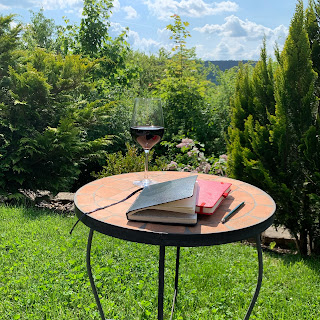 The current temperatures of 30 degrees invite you to move your work outside. Said and done! Just poured a glass of wine and let's go... today's program: The further development of the story of my comic projects. Two projects that are currently in development and will be printed in 2023 and another project that I am currently developing the rough plot for. A great change from the game developer everyday life!
at May 19, 2022 No comments:
Email ThisBlogThis!Share to TwitterShare to FacebookShare to Pinterest 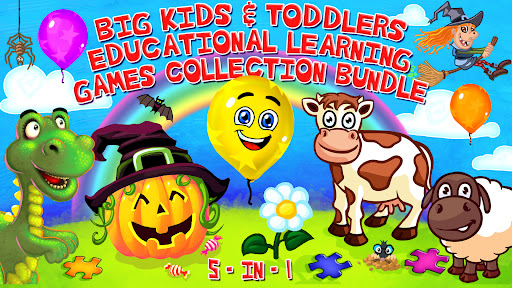 If you have small children and own a Nintendo Switch game console, then you can now buy the large McPeppergames learning game bundle for small children in the Nintendo E-shop. It includes five great standalone Nintendo Switch games that are much more expensive to buy individually. Note: The games all use the touch screen function of the Nintendo Switch console and are therefore perfect for on the go or on vacation. All games (and many of the graphics) were developed by myself and are therefore indie games. So if you want to support an indie developer, don't wait and get the game pack... ;)
at May 16, 2022 No comments:
Email ThisBlogThis!Share to TwitterShare to FacebookShare to Pinterest 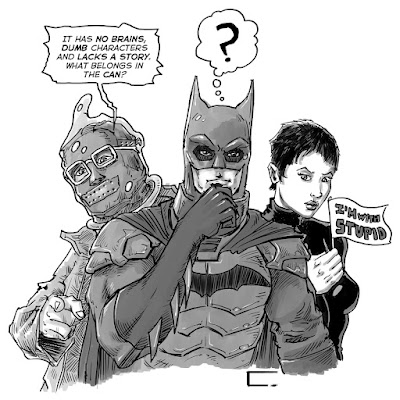 ... and I usually don't talk about it publicly if I don't like an entertainment "product". But I've noticed that in recent years, many writers in the entertainment sector don't put much effort into developing stories for a wide audience. I think that's a shame, because as an author you should always have an interest in inspiring as many people as possible without "insulting" them by denying their intelligence. And now to the new Batman film: It does exactly the latter and also robs Batman of all the qualities that have characterized the character over the years. It's impossible for me to list all the things that could be improved about this film...I don't want to either. But I'll give a few examples of what I don't think should be done in a Batman movie:

Surely there are many out there who think the film is good... there's no other way to explain the film's good rating. But I think with every entertainment project STORY should come first which is not the case with this film. Especially if the film was preceded by great Batman films just a few years earlier, such as Batman Begins or The Dark Knight who did work on so many levels. Just my two cents.

at May 16, 2022 No comments:
Email ThisBlogThis!Share to TwitterShare to FacebookShare to Pinterest

I'm currently developing some ideas for a new creator-owned comic series on the side. Since I've been toying with the idea of making some YouTube drawing videos for a while, I used the first sketches to try out the process and software. The result is two first videos that are already online. If you like the videos, please let me know, tell your friends about the videos and like and subscribe to the channel.
at May 16, 2022 No comments:
Email ThisBlogThis!Share to TwitterShare to FacebookShare to Pinterest 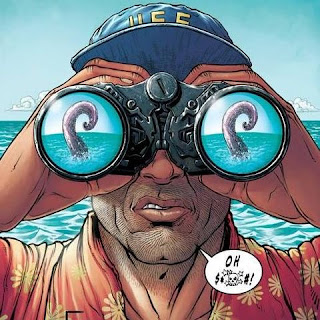 For you who got accidentally here or are interested in me and my projects: Welcome! A few words about me in case you don't know me: My name is Chris Noeth and I'm the CEO of McPeppergames. I'm the creator of the Android and iOS strategy game COLOR DEFENSE and a variety of other apps and games. In addition, I am also a comic writer and comic artist. I'm currently working on various game- and comic-projects. On this blog you will find excerpts from my current comic projects, comic art stuff and from McPeppergames game projects. Please check out the McPeppergames games online and share the blog link with your friends. If you want you also can follow me on Instagram, Twitter and Facebook. BTW: The image you can see here is from a very old comic book, called "It Came From Beneath The Sea... Again!". It's first two issues were drawn by me with a story by Clay and Susan Griffith and colors by Sven Strangmeyer. The comicbook is a sequel to the Ray Harryhausen classic monster movie "It Came From Beneath The Sea". If you have the DVD you can find a special about the comic on it. Thank you! Have fun!
at May 16, 2022 No comments:
Email ThisBlogThis!Share to TwitterShare to FacebookShare to Pinterest
Newer Posts Home
Subscribe to: Posts (Atom)